KELSTON
My Nainai would take walks with me and pick honeysuckle flowers for me to put in my mouth or to dry and make them into a tea for its ability to quell the 'fire' within me and restore balance.
My Baba's teeth would be a gross colour from the tabacco he smoked. I would recoil from him because I thought he looked terrifying.
Baba would work with a lot of wood, having learned carpentry before I was born. The garage would have a lot of it, and the house had a lot of his cabinet and chairs from that time in his life.
Apple trees dotted this property. I can still imagine the morning light hitting the dew from these trees as I would trundle along, picking at the grass and nibbling at the wild strawberries.
OTAHUHU
Me and my Mama love the smell of gardenia. The Pacific Islander community would sew live gardenia flowers into crowns and parade them into the store. Mama would spend some of her time drawing gardenia flowers onto white fabric for her customers who would embroider these designs. There was a cheap $2 fragrance that my mum would sell that was really good actually. But not as good as the fresh flowers that we'd eventually plant at our Parnell residence.
The Pacific Islander community would always smell of coconut. Their hair, their food, their entire being, would be blessed and drenched in the products of this giant seed. All of the sweet treats that we picked up from this community would be cassava or arrowroot stewed in sweetened coconut cream. Me and my mum love the flavour of coconut.
Across the street from the store, and turning right, I'd be able to get 12 deep fried banana fritters, these tennis ball sized banana bread fried batter things that would stain the brown bag clear and leave me beaming. I'd first really gotten into them from this caravan at the Avondale Markets, after the part where we'd be able to find amazing clothing.
Scented Vaseline, close to my lips, close to my mother's hands, would soothe the chapping that we'd induce upon ourselves due to our own obsessions. My own for the smoothness of my lips, My mother's for her determination to work to provide for the family.
HOWICK
My favourite treat from the dairy would be the Tip Top Vanilla ice cream tub with the little wooden paddle spoon. This would be my favourite part of the sausage sizzle fundraisers at Mellons Bay Primary.
Our property was lined with dozens of Feijoa trees, which would completely shed all of their fruit for us to pick and gorge ourselves on in the Autumns.
Laolao would steep white tea in her Communist-era ceramic mug until it had no flavour over the day - I would get the last steep every night.
My mum would stop on the sides of roads to pick some wild fennel to chop up and put in dumplings.
PARNELL
Coffee breaks would be a common thing around Parnell, where I'd relish at the thick creaminess of a flat white in my free periods.
My stress treat was for sure an AUT cafe ginger slice for those nights I'd work until 11 on standardised testing.
This was an academic time - saturated with books and paper.
I met Hope, who bought me apple cider after school at the Countdown in 277, and before the Fat Freddy's Drop concert at the Auckland Zoo. Remember, lads and lasses, that scrumpy is devious and you should and should not have it.

My memories are fallible.
A lot of my values are rooted in the memories, the land, the food, and the atmosphere shared with myself and people who influence me. As I depart from my childhood to adulthood, I feel a sense that I'm departing a very fragile and precious time of my life, and putting it behind me as I face the present and prepare for the future.
I recall not crying the first time I entered those gates with my carry-on. I left my parents, my city, my friends, and my country behind. I spent a lot of time in my life wishing I could escape my country - a small place associated with sheep, rugby, and greenery, and not a lot going on. I had no reservations. I had a sandstone seat of knowledge, more progressive people, and a life free from the restrictions of home awaiting me. My future was infinite.
A year happened. A whole lot of memories were made. Tears cried, euphoria shared, fountains hopped, kisses planted, nights ground deep in assignments, sunrises caught and dedication filling cup after cup of coffee.
Suddenly, after landing back through the long white clouds, I was back home. Back in the same damp greenery, thick with the sap and smells of flax, grass and mangroves. Back with the tint of the streetlights which illuminated so many of my solitary walks.
I noticed how precious the place I'm from was as I climbed up Mount Hobson amidst the dark clouds, a dormant volcanic cone near my house, to meet Skuddy there the night I was back. We shielded ourselves from the wind in a kumara pit to light a smoke. We hobbled down the timber framed walk down, weaving a jumbled tapestry of banter. As I was ferrying back with Ruby and sighting this long tapered sea creature, a shield volcano named Rangitoto, stretch its humped back to break the surface of a silver sea. As I put down a cardboard box of artificial flowers down outside Mama's shop in Otahuhu. As I sat outside Revel with Phodiso to drink some tea and flat whites with him. As I sat in the Hardware Meetup at the Grid in Wynyard Quarter and listened to Hanna share her wisdom. As I picked gaicai with Mama in the Avondale Markets and sighted the same dog in the basket trolley dragged along on the wet muddy ground from a year ago. As I sighted the deep green, dense bush that was the Henderson Ranges outside of a wooden framed window. As I sat with a table full of dim sum and across from my Mama and Baba. As I was turned away from some creeps in the Kong nightclub by Teresa. As I visited Pah Homestead with Renee out of spite of not getting the hot chips we wanted a decade earlier. As I practiced calligraphy with Baba. As I walked through the University of Auckland art studios with Waikohu. As I stroked the exterior of some durian with Amber. As I discussed feminism with Te Wai at Jamie's flat party. As I talked shit with EJ. As I discussed GMO's with Charlotte on a bus from Mt Eden. As I revisited the old studio and said thank you to Stracho, my old art teacher. As I explored some independent craft markets with Bliss and Simon. As I shared some prosecco with Jack over checkered tablecloth, whose hugs I miss.
I cried the time I left again. Held in my mother's nape, embraced by my father's torso. I passed back, lugging myself through the bent metal gate, padding through the burgundy carpet, into uncertainty. I never have faith that I can find my way through airports since they're poorly designed. How could I have faith that I could face life?
Will I forget my roots? Those which give me strength and confidence to carry myself into the future? I see myself losing touch of where I'm from in the way the vowels round themselves through new corners, how I say things more characteristic of Kiwi-isms than I used to, and being uncertain in how I used to say things. How red squiggly lines underline the way I spell things. How I'm unable to get used to Fahrenheit. How I'm not used to calculating in fractions of inches. I guess that's the most obvious tie I have to home - the jarring nature and jabs of adapting to here.
This project is an exercise in mapping my memories and providing myself with the tools to ground myself if I feel disoriented. 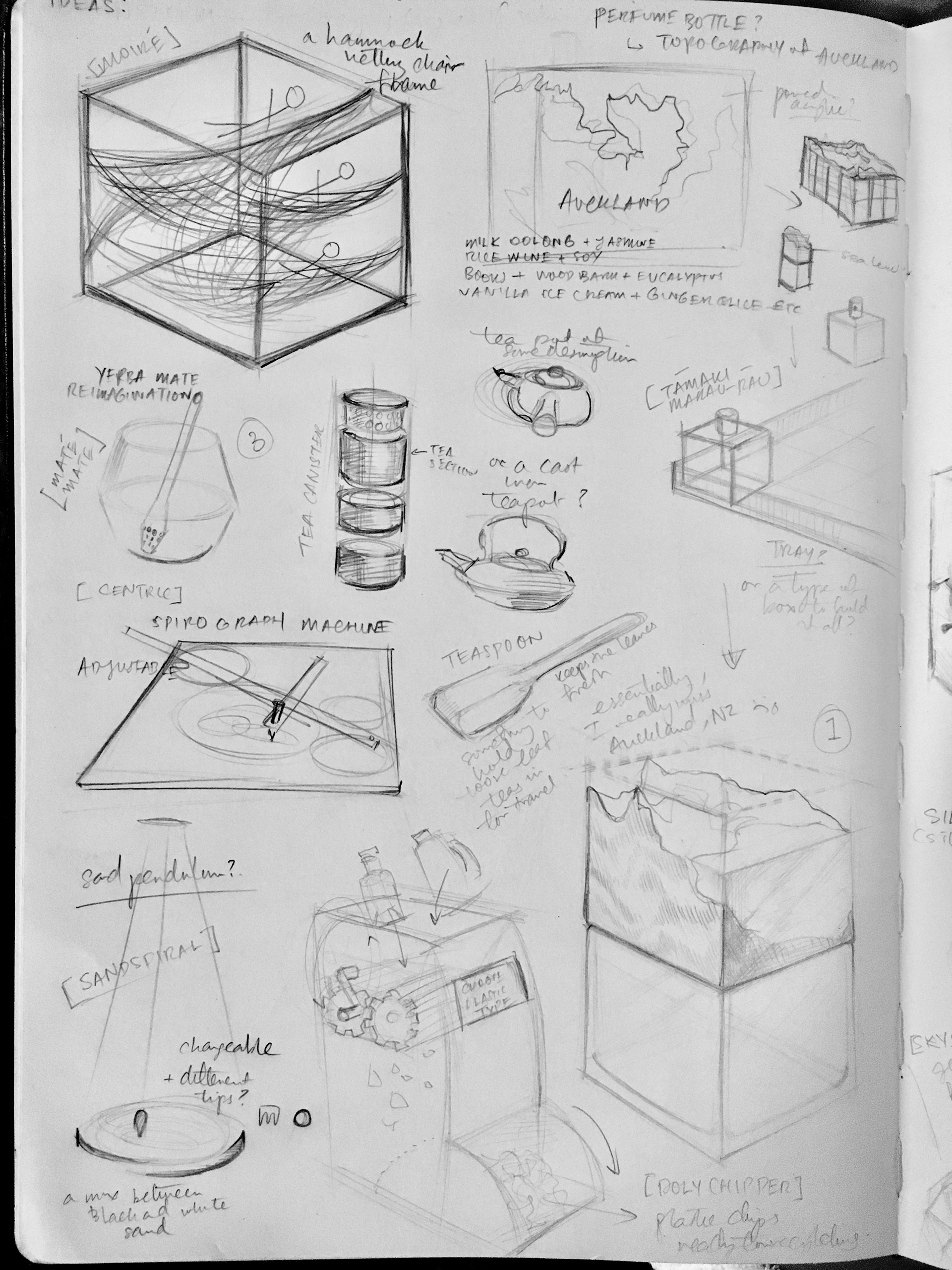 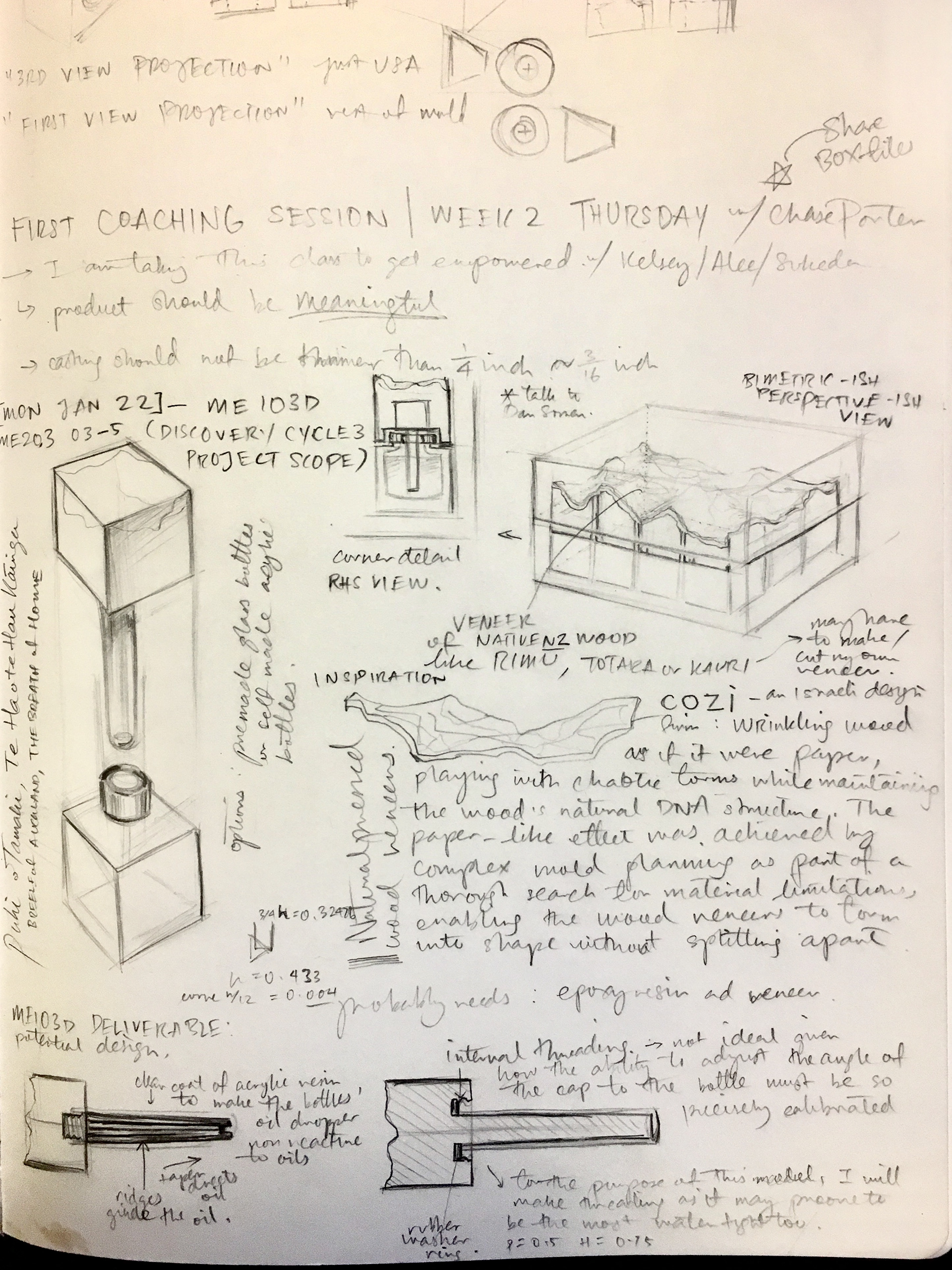 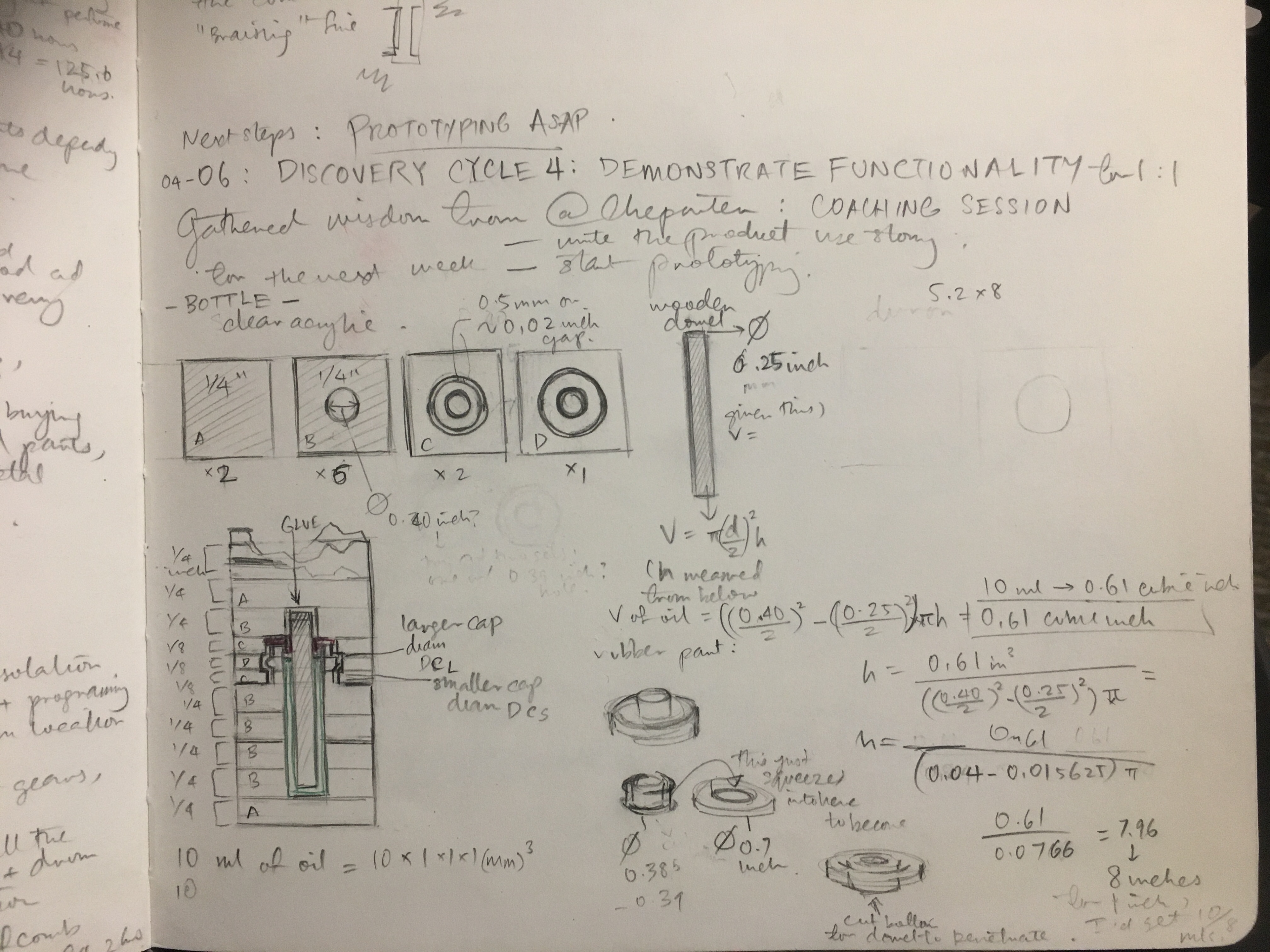 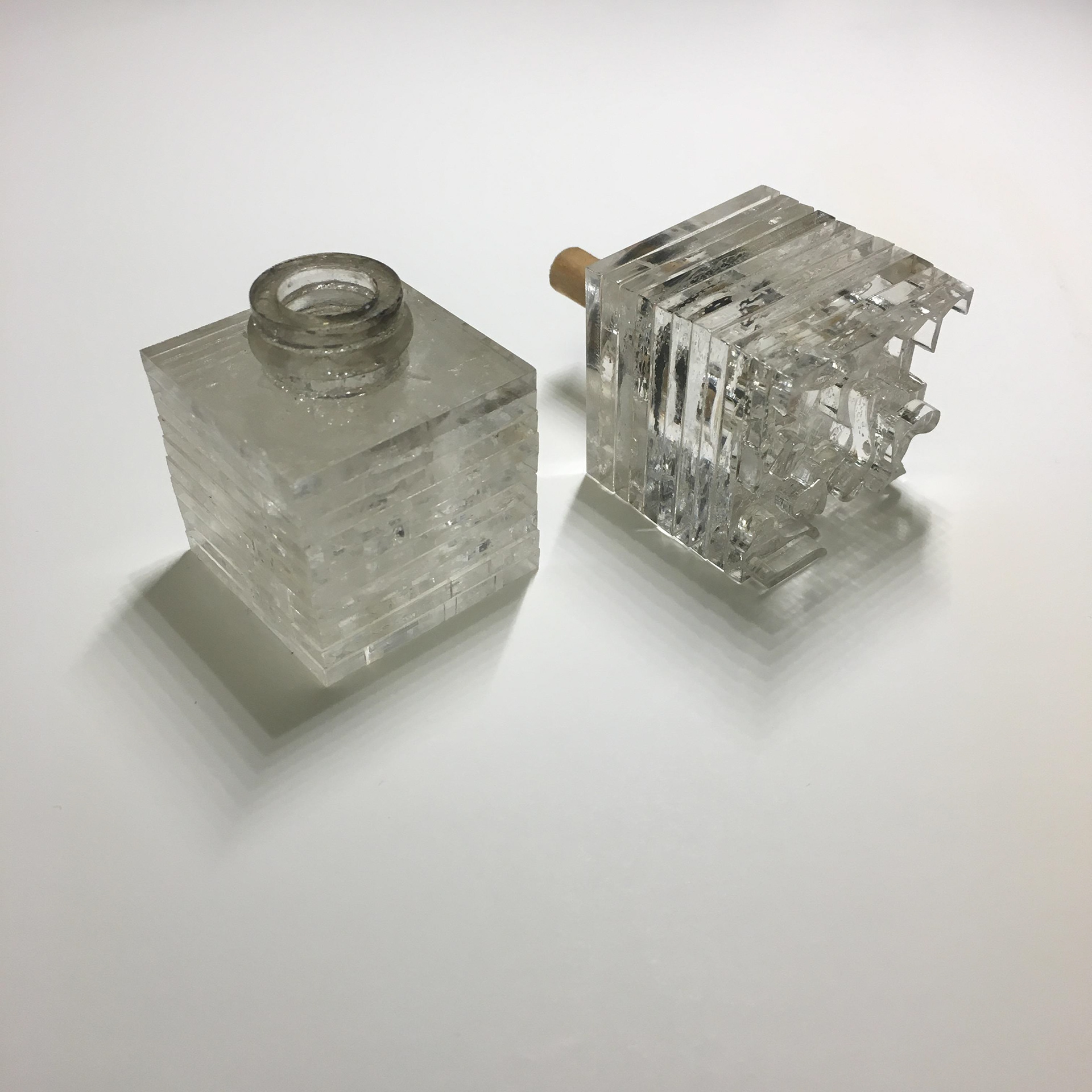 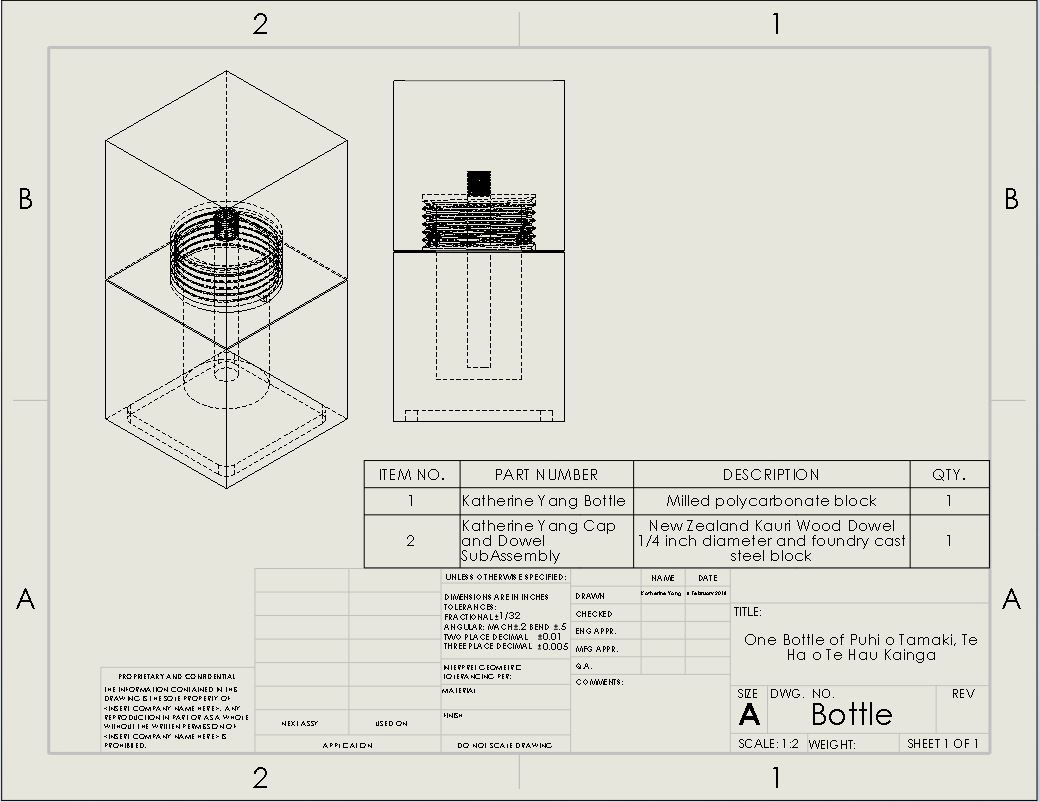 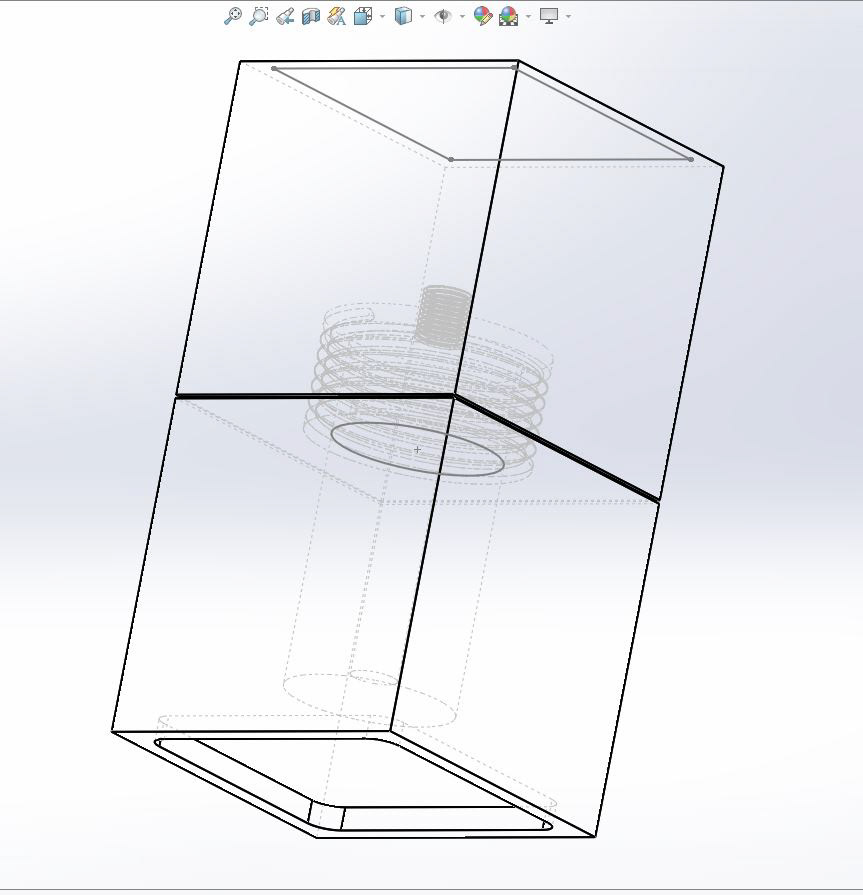 CAD:
Finalise design, figure out the topography and apply it to the part. Create a drawing with accurate dimensioning, and print things out. Create CAD models of the cast parts.
PROCURE MATERIALS:
Purchase materials.
MACHINING OPERATIONS:
METAL CAPS:
Start with a wooden block, cut it down to size. Get trained up on the shopbot. Clamp it down, and use it create a wooden model of Auckland City. Finish the carving of small details, and maybe underwater details. Cut up the carved piece into four. Create draft angle sides to each of the four blocks. Create gates and runners in the woodshop. Attach to a pattern board and create fillets. Get everything looked at and approved by a TA.
Practice ramming up and seeing if this creates a clean pull. If so, go ahead and prepare for pouring. *(Ask when this happens - at which frequency)
Finish the outside with a mill and mill the right diameter holes for the two press fit pieces. File the edges intermittently, and keep them in a box.
Mill or drill the right diameter holes for the the press fit wooden dowel.
Press fit cylinder A (wooden dowel and o-ring wall):
Start with the right diameter rod. Face the end. Turn the ledged wall, and then drill the hole needed for the wooden dowel. Part, then repeat.
Press fit cylinder B (internal threads):
Start with the right tubing. Turn the external diameter with a lathe. Turn the internal diameter with a boring bar on the lathe. Create internal threading *(HOW???). Chamfer and part off to a bit more than the right length. Face the end of the next length on the lathe. Repeat four times. Mill to the right length and an even finish on the ends.
Press fit this in to each individual cap.
Put the rubber o-ring into the cap.
POLYCARBONATE BOTTLE:
Start with a 3" diameter rod. Use an end mill to face the ends, and to drill a certain depth into the rod from the flat end. Turn the bottle neck on the lathe to 7/8 inch diameter. Create a relief groove and a chamfer. Use a die to thread the bottle neck. Close the metal cap onto the polycarbonate bottle and mark out where the sides of the cap lie where the bottle closes when oil  is put in there and see where to turn the bottle cap comfortably and still create a seal.
Repeat 3 more times to create a series of 4.
Finish and sand down. Buff where you can carefully so as to not melt the polycarbonate.
DOWEL:
Start with some kauri and cut them down to size as long oblongs. Put them through the dowel plate. Coat them in the right finish to create an oil-proof coat, wait for them to cure, and then use epoxy resin to secure them in the caps.
PERFUME:
Purchase perfume oils soon and mix them in various measures to get them just right and not gross.